Assisi: the city of Saint Francis

Assisi is a city of the Umbria region in the province of Perugia and is worldwide famous for being the birthplace of the Saints Francis and Clare. You probably don't even need a great presentation of this charming place, however I want you to remember that besides being a religious destination, Assisi has a unique historical heritage, beautiful views and delicious local specialities. For a more complete and relaxing tour, I would suggest you to stay there a whole weekend, but if you only have one day this mini-guide will surely help you better plan your visit!

Walking through the streets of the centre among the small shops, narrow streets and food smells is a very pleasant and relaxing experience. On top of the list of must-see attractions there's of course the Basilica of St. Francis, composed of two overlying churches: the lower and the upper basilica, plus a crypt with the tomb of the Saint. The two churches are decorated by the greatest painters of the XIIth-XIIIth century, such as Giotto, Cimabue, Lorenzetti and Simone de Martini. Much poor of art is the crypt, which can be accessed by the middle of the central aisle of the lower church; here the Saint's remains are kept in an urn of rough stone. In 1997 a strong earthquake caused the collapse of part of the frescoes and vaults of the upper basilica, partly restored after a very hard work during which the church was closed to public. 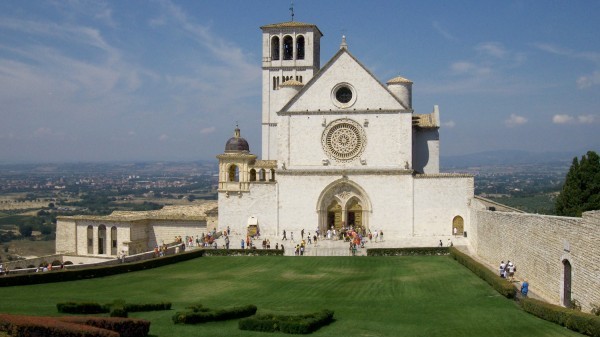 Crossing Via San Francesco you will get directly to the medieval square Piazza del Comune, overlooked by the most important buildings of the city such as Palazzo del Capitano del Popolo, the imposing tower Torre del Popolo, the building Palazzo dei Priori with the Fountain of lions and the fascinating Temple of Minerva of Roman origin, which still perfectly preserves the six Corinthian columns and the entire facade after more than 2000 years. Just below Piazza del Comune, you can visit the Ancient Roman Forum that was found in 1836 during excavation works. 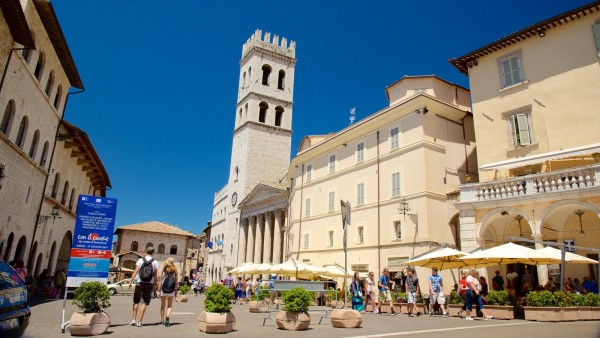 Leaving the square, immediately to the right you come to the chiesa Nuova, built in 1615 on the remains of what people believed to be the parental house of St. Francis. Going past the church you will arrive at the oratory of S. Francesco Piccolino, where the Saint was born according to the legend. Continue toward Piazza Santa Chiara, dominated by the basilica; here it is kept the wooden crucifix that accoring to ancient beliefs spoke to St. Francis. In the crypt lies the sarcophagus statue with the bones of Saint Clare. Going towards the upper part of Assisi, you'll reach the austere Cathedral of San Rufino or Cathedral of Assisi, in Umbrian Romanesque style with three rosettes and three portals. Inside there is a baptismal font, which according to legend has been used to baptise St. Francis, St. Clare and Frederick II of Swabia. For a unique view over the city and the entire Umbrian valley from Perugia to Spoleto, climb up to the Rocca Maggiore, repeatedly destroyed and rebuilt. Today its beautiful halls are open to visitors and home to numerous reconstructions inspired to medieval life. More recent is the Rocca Minore or Rocchicciola, which is located on a hill to the right side of the Rocca Maggiore, to which was once connected through a long wall and propably through a secret underground path. 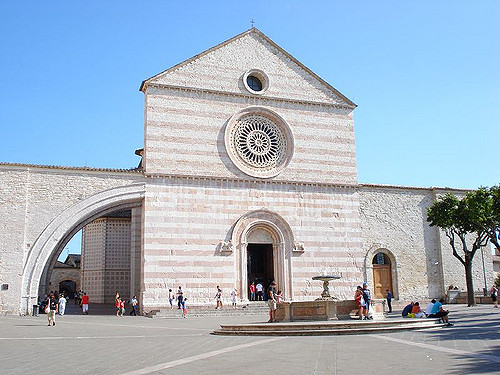 Outside the ancient walls of Assisi at about 4 km from the centre rises the majestic Basilica of Santa Maria degli Angeli. Inside it has a basic and simple style to better emphasize the Porziuncola, a small church, and the Cappella del Transito a little hut where St. Francis died. In a wing of the Basilica you can admire the rose garden, which has become famous for its roses that - according to tradition- started blooming without thorns after an event involving the Saint. Still outside the city centre, on the slopes of Subasio Mount there is the Eremo delle Carceri, where St. Francis of Assisi and his followers retreated to pray and meditate. To live all these places fully, I would suggest a deepening of local history or even better taking a guide, that you can book on the spot! 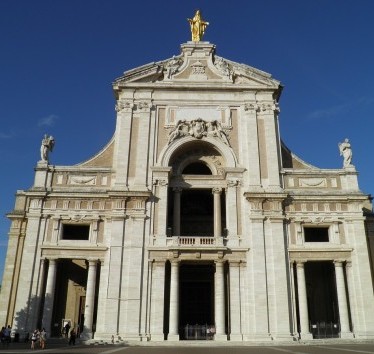 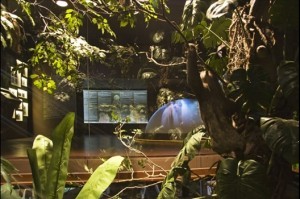 In the rooms on the main floor of Palazzo Vallemani, a beautiful Baroque residence, there is the Municipal Gallery of Assisi, which includes frescos and works from civil and religious buildings of the city and surroundings. Four rooms are dedicated to a exhibition on the Jews saved in Assisi during the period of Nazi persecutions. Palazzo dei Canonici, in front of the cathedral of San Rufino housed since 2016 the Diocesan Museum; in the basement of the building you can visit the remains of a Romanesque cloister and the crypt of the basilica, decorated with rare frescoes and a Roman sarcophagus. The MUMA (Museum of the Amazonian Indios), located near the Convent of the Immaculate Conception of the Minor Friars Capuchins, offers a cultural and sensory journey through the beauty of the Amazon, using sophisticated technologies and interactivity. Returning to the theme of religion, the Gallery of Contemporary Art Pro Civitate Christiana collects paintings and sculptures on the theme of Christ. From the apse of the Basilica of Saint Francis you can access the Papal Palace with inside the Treasure Museum, the most important collection of medieval art of the region. Another part of the museum is dedicated to the Perkins collection, a gift of the American art historian Frederick Mason Perkins, which consists of about 50 paintings on wood of the XIV-XVI centuries. 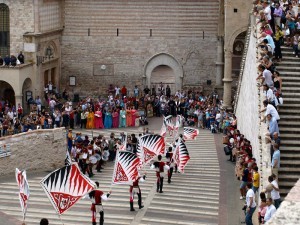 Assisi offers many events you might run into during your visit. Let's see some of the main ones, not to be caught unprepared! In early May, it takes place the Calendimaggio, a reenactment of medieval life with parades, music, dancing and the famous battle between the two hamlets of the city. Starting from the last weekend of August (Thursday, Friday and Saturday), you can go back to the period when Assisi was divided into "terzieri" (factions) with the Palio of San Rufino, which ends in a shooting competition with the crossbow. The Cavalcata of Satriano (horse ride) is held every first weekend of September: jockeys wearing past costumes retrace the journey that knights made till Nocera Umbra to take Saint Francis back to his home town to die. There're many celebrations related to religious festivals, such as the Franciscan celebrations every 4th of October and the Festa del Voto on 22nd of June, in memory of the expulsion by St. Clare of the Saracens from Assisi.

Looking through the menus of local restaurants and small inns, you will find simple but savoury dishes, something we are not so used to in recent times! The traditional appetizer consists of sheep or goat cheeses served with various types of cured meats - strenght of the Umbrian territory - or the classic bruschetta, enriched with truffle sauce or truffle cream... a real delicacy! Homemade pasta is the king of first courses, including umbricelli, a dialect word meaning earthworm due to the large spaghetto shape and stringozzi, meaning string shoelace, a kind of long, thin, irregularly shaped spaghetti. Yes, I know, this might seem uninviting, but I assure you that served with meat sauce, asparagus or fresh mushrooms they're delicious! As a second course you should opt for grilled or roasted meat. If you're looking for something very special and typically local, I recommend you the "piccione alla ghiotta" (pigeon). A classic cake is the Franciscan loaf, similar to the Tuscan "cantuccio" but less hard and usually accompanied by the Wine of Saint Francis, a fortified wine similar to the Vin Santo made with raisins. The Assisi area has been hosting for centuries the production of wines such as the Rosso, Rosato and Novello based on the Sangiovese and Merlot grapes (red wine), as well as the Bianco (white wine) based on Trebbiano and Grechetto grapes . Together with other neighbouring towns, the city is part of the so-called Strada dei Vini del Cantico (wine circuit), crossing the streets of the Roman era that still connects the main centres for wine production. Among the handicrafts produced in the workshops of the centre stand out pottery, wrought iron and carved wooden objects. Also renowned the workshops of gold, inlay, carving, those for the creation of religious chiselled sculptures and for restoration, from furniture to musical instruments. 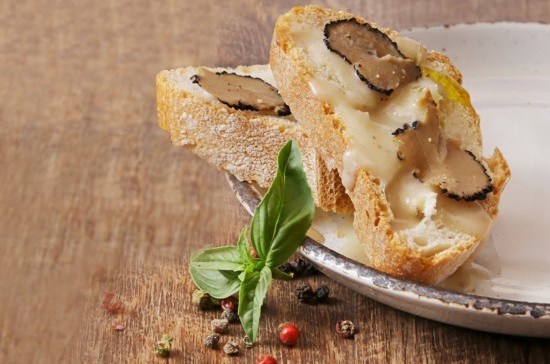 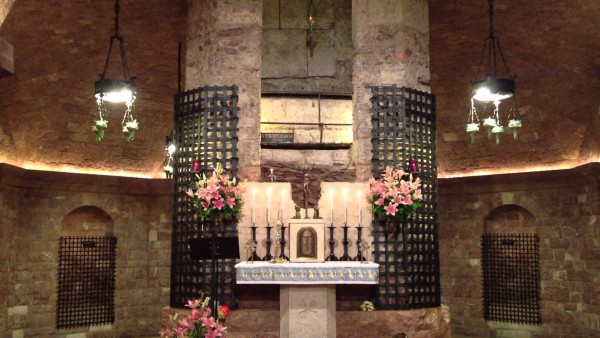 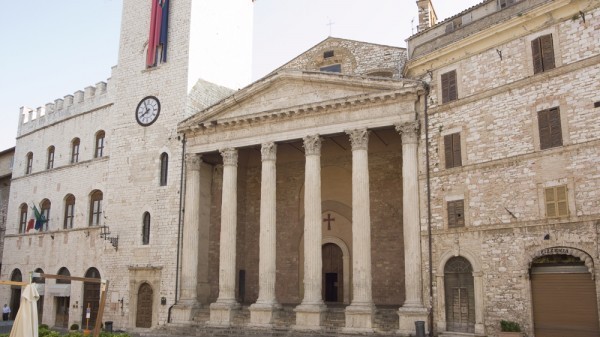 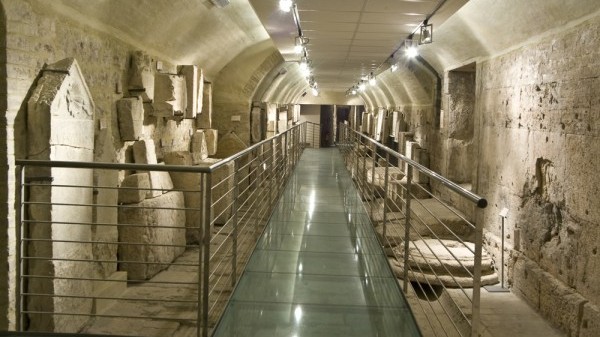 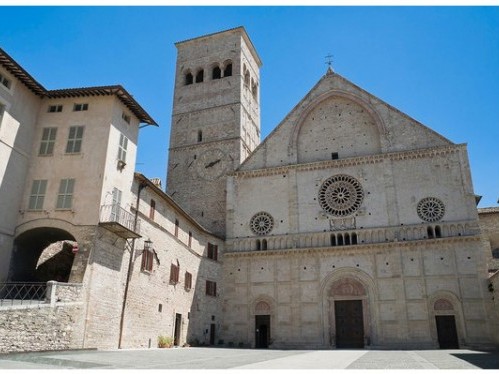 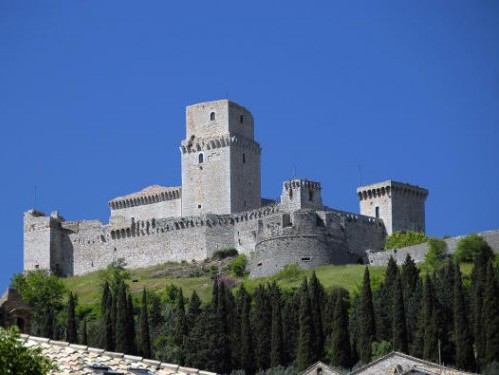 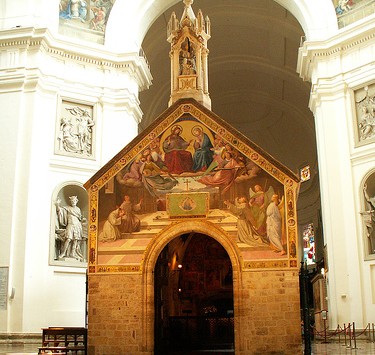 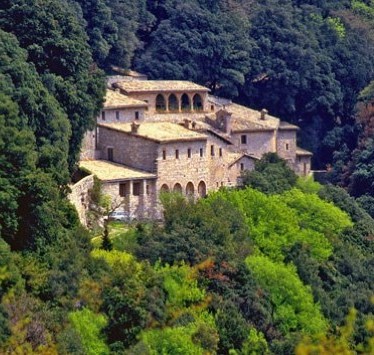 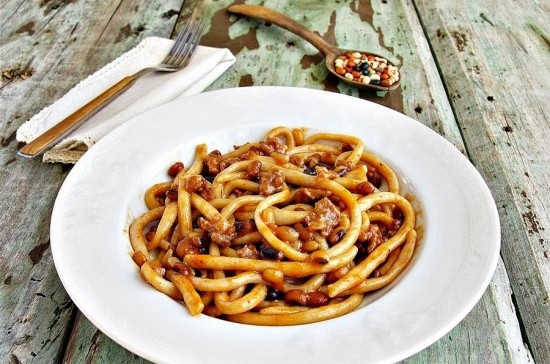 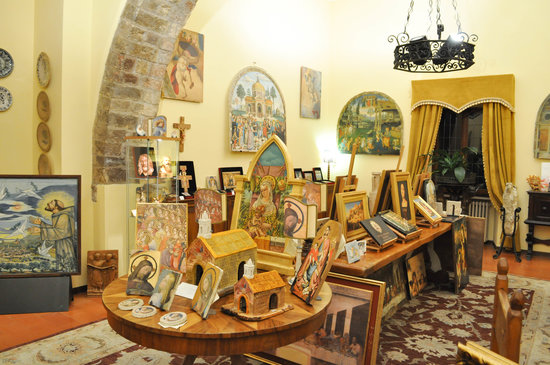