Along the ancient Via Flaminia, between the municipal districts of Acqualagna and Fermignano, one can find Gola del Furlo. Green meadows, rocky cliffs

and dense forests: the landscape around here is never boring. The Furlo Pass represents an extraordinary scenery to explore by foot along the many hiking trails that lead to its peak. Along these trails, one can admire the majestic cliffs, the ancient Roman Age tunnel, many rare plant species and the emerald green waters of the Candigliano River.
The deep gorge is the result of the hard and extensive erosion performed by the river waters, which, just like a sculpting artist, smoothed the rock turning it into a true work of art.

Dominating the charming natural landscape of Gola del Furlo is without a doubt the astonishingly beautiful San Vincenzo Abbey, a truly ancient monastery immersed in the green expanses of Le Marche hills. The simple and majestic appearance of the fortified structure make every visitor fall in love at first sight: the doors that lead inside are skillfully decorated and bear witness to the important role of the Abbey, a priceless Medieval jewel.

The abbey hosts inside well preserved fifteenth-century frescoes of Umbria-Marche origins, but the most mysterious and interesting portion of the Roman church is undoubtedly its crypt. The relics of the Bishop of Bevagna, San Vincenzo, rest here and it is from him that the abbey takes its name.

In the past, Via Flaminia used to be a major connector between the cities of Rome and Rimini; however, the road was impervious, bumpy and difficult to travel. A road that snaked between the frequent rock slides and that climbed up the steep walls of the mountains with cliffs overlooking the river that roared below them. It was specifically for this reason that the Romans built a tunnel approximately 40 meters long that made Via Flaminia easier to travel.

The tunnel is still visible and usable to date; a masterpiece created with extreme care and accurate excavations that passes through the mountain in the narrowest point of the gorge.
It is from this tunnel that the name “Furlo” originated: from the Latin term “Forulum” which, in fact, means hole.
The Romans were not the only ones to leave a mark in this enchanted place: in 1936, the “Milizia Nazionale Forestale” (State Forestry Militia) sculpted the face of Benito Mussolini on the rocks of Pietralata. It is said that in the ‘20s, Mussolini, when leaving Rome to head back to Predappio, followed the Via Flaminia and thus crossed the Gola del Furlo. Despite the immense effort and extraordinary artistic feat accomplished, the sculpted image of the “Duce” was destroyed towards the end of WWII and the material obtained used to rebuild the surrounding roads. Today, of the dictator’s sculpture, only a few rare photographs remain while it is very difficult to notice where it was located on its former site.

Gola del Furlo, nowadays a place of peace and wonders, in the past was instead home to bandits of all sorts and thus marred by bad reputation. As stated earlier, the Furlo Pass was a strategic location in the Roman Age since it allowed reaching Ravenna, which at the time was the capital of the Peninsula. Therefore, it is clear that the Furlo Pass was a mandatory stop for travelers, goods and soldiers: not by chance a station and an Inn were found here where travelers could stop and rest.
It did not take long for bandits to understand the value of the Furlo Pass and that included especially the Goths, a population that easily decimated the few Roman soldiers standing guard to the Pass and who subsequently fortified it. The castle, built by the invaders between the tunnel and the Grotta del Grano (Cave of Wheat), was conquered next by the Byzantines but less than ten years after that, the fortress was once again under the control of the Goths.
Subsequently, it was the turn of the Lombards to take over the Furlo, but by then this majestic and spectacular place was cursed to endure a thousand years of fear and darkness.
In fact, the Furlo Pass turned into the turf of merciless cutthroats to the point that even the Papal State Mail service for a long period chose not to make use of this road, certainly faster respect to others but a lot less safe.
A tale worthy of mention is the one of the legendary capture of the brigante Musolino, a murderer who managed to escape from prison to kill his accusers. When Musolino happened to be near the area of the Furlo, he was captured by two officers of the Carabinieri force, who did not give him any chance to flee.

Gola del Furlo and its nature

The distinguishing characteristic of the Apennines in Le Marche region is that most of mountain range in this area is crossed by rivers not too big but ancient enough to have dug deep caves between the mountains: the famous calcareous gorges capable of astounding for their incredibly vertical walls; one of the most accessible, and even most spectacular of these is indeed Gola del Furlo. 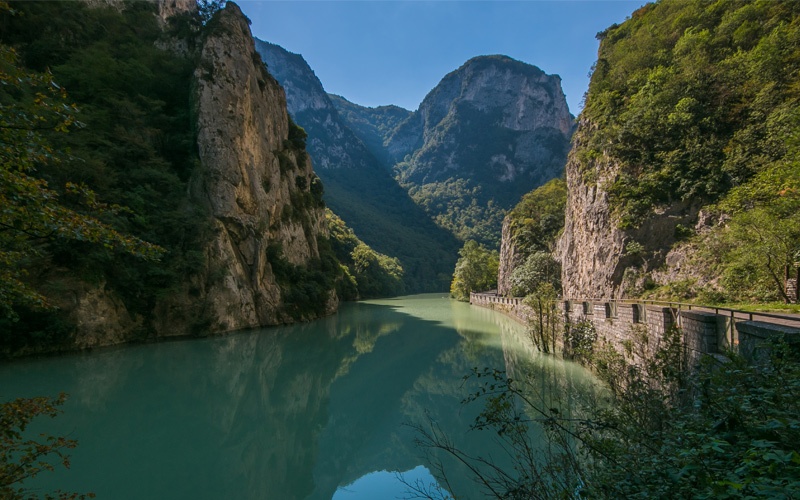 This extraordinary place is also an area full of biodiversity varying from forests to vast and sunny meadows to the typical humid areas of the river, all in a short distance. Over these stiff and rugged calcareous rocks it is possible to find growing rare bushes which can survive in extreme conditions thanks to their ability to root themselves into the rock.

In addition, Gola del Furlo is one of the richest and most famous deposits of Ammonites: the site is so important that some of the fossils took the name from the place where they were found. The last wonder, but not in order of importance, is the Furlo Dam. It was one of the first dams built by Le Marche Region and it forms a special lake by blocking the flow of the Candigliano River.
Now the Gorge does not frighten as much as it did back in the Roman Age and the reason is simple: the presence of the lake slows down the river, which, in the past, roared furiously in the narrow and deep gorge, frightening and causing vertigo to those traveling on the nearby road.

From Gola del Furlo to the precious truffle of Acqualagna

The three kilometers of the Via Flaminia that cross the Pass ensure a relaxing and easy hike which is not to be missed since the beauty of the varied and flourishing nature in this enchanted place will remain an unforgettable memory immortalized also in the pictures of tourists well after having completed the short excursion.
Thus, what is better than sitting down and eating after a good hike on mountain trails?
Once having walked among the wonders of nature and enjoyed the many legends of this extraordinary Pass on the Apennines, it will be time to head to the road leading to the small town of Acqualagna.

This small place is well known internationally because of the quality of the dishes served at its local osterias: Acqualagna, in fact, is the paradise of white truffle, a delicacy that not to be missed by tourists.

What to do at the beach in Le Marche: activities & experiences 06 April 2022