At the foot of the Ingino Mount in the province of Perugia rises Gubbio, one of the most ancient medieval towns of the Umbria region, as witnessed by the Tables of Gubbio (Tavole Eugubine). These are seven bronze tablets recovered in the XVV century, written in the Umbrian language and containing information on the uses and customs of this beautiful city. It is a place rich in history, culture, art and age-old traditions.

What to see in Gubbio?

Gubbio is rich in monuments and architectural masterpieces that evoke the power of this town. Narrow streets, historic buildings, squares, theaters and churches with seventeenth-century frescoes. In short, a real open-air museum.

In the picturesque square Piazza Grande there's Palazzo dei Consoli, one of the most impressive city palaces and symbol of the city. The building, which dates back to the XIV century, is in Gothic style and houses the civic museum that keeps the precious Tables of Gubbio. Here you also find the Praetorian Palace (Palazzo Pretorio), today the Town Hall. In front of the Cathedral stands the Ducal Palace, built in the XV century by the will of the Duke Federico di Montefeltro. Inside you can admire the small study (a faithful copy of the original one exhibited at the Metropolitan Museum in New York) and a beautiful courtyard consisting of a series of arches supported by columns and decorated capitals. Other interesting buildings are Palazzo del Capitano and Palazzo del Bargello. 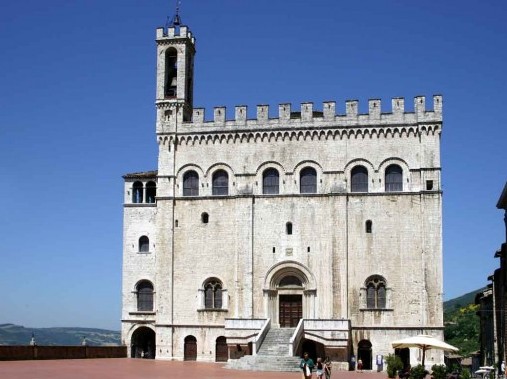 The Cathedral, which dates back to XII century, houses the relics of many Saints and Blessed people, including those ones of St. Mariano and St. Giacomo. The Church and Convent of St. Agostino houses some frescoes by Nelli, while inside the Church Santa Maria Nuova you can admire the Madonna del Belvedere. The Church and Convent of St. Francesco rises on the ancient house of the Spadalonga family; the Church of St. Giovanni is characterized by the Romanesque facade and bell tower. Visit the Church of St. Pietro, the Church of St. Domenico and the Church of St. Andrea or Monastery of St. Marziale. Outside the walls, you'll see the Roman mausoleum of Pomponio Grecino, the Church of St. Secondo, the Church of Madonna del Prato and the Church of Vittorina, where according to tradition St. Francis encountered the wolf. There's also the Roman Theatre, dating back to the 1 century BC and restored between the XIX and XX centuries. During summertime it offers many classical performances. If you're not afraid of heights, it might be worth climbing to the top of Ingino Mount (908 m asl) by cable car to admire the Cathedral of St. Ubaldo, which houses the remains of the Saint and the famous candles. 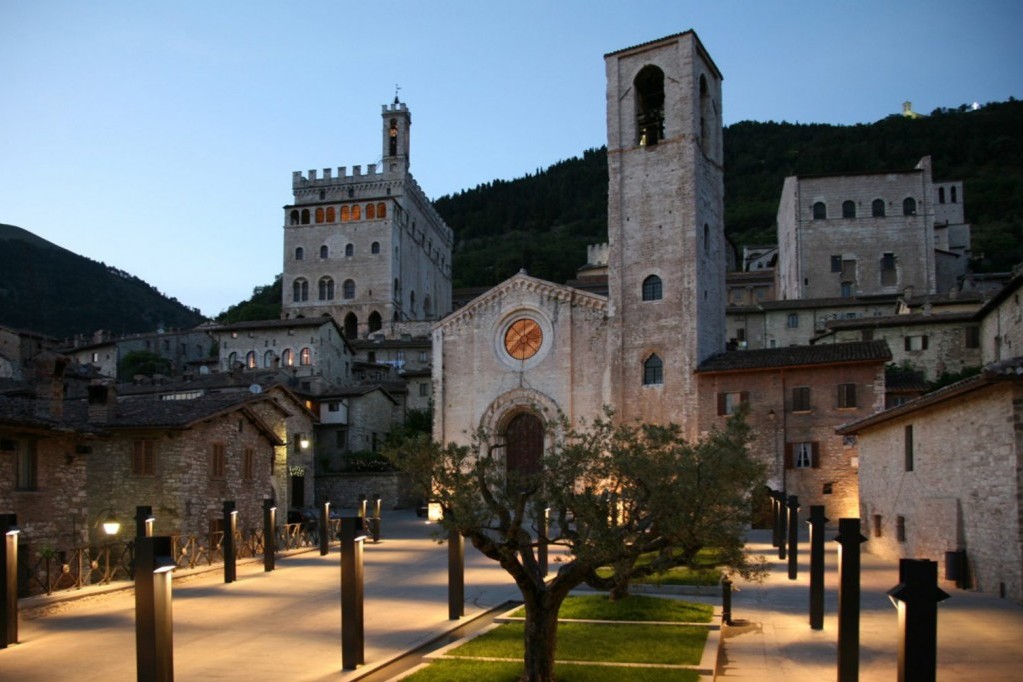 In the surroundings of Gubbio...among parks and villages

Umbria is a region rich in parks and protected areas of great natural interest, such as the National Park of the Sibillini Mountains, the Park of Colfiorito, the Park of Cucco Mount, the Park of Subasio Mount, the Tiber River Park, the Park of Mount Peglia and Selva di Meana, as well as the Park of the Trasimeno Lake and Nera River. In the vicinity of Gubbio you should definitely make a stop at the Park of Cucco Mount, a predominantly mountainous park characterised by rock walls, pastures and very evocative gorges. It is known for its complex of underground karstic caves which is among the most important ones in Italy, partly open for guided tours and excursions. The whole area is ideal for outdoor activities: hiking, hang-gliding, paragliding, mountain biking, fishing, caving, canyoning and much more. The region is also characterised by the presence of charming villages, such as Montefalco, Spello, Bevagna, Bettona, Deruta, Trevi, Corciano, Norcia, Spoleto, Assisi and many others, all worth a visit! 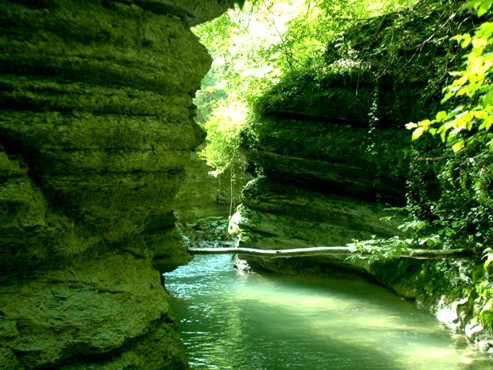 The traditional cuisine of Gubbio is simple but full of flavors, thanks to the excellent quality of local products. It is based on recipes of the ancient tradition: soups of legumes and cereals, noodles, roast meats, hare pluck, crescia al panaro - a kind of flat bread to taste with local cold cuts and with the friccò lamb, duck, chicken and rabbit. Among the typical dishes of Gubbio there's the brustengo, a fried bread served with bacon, ham, sausage, onion and rosemary. Local cooking is also famous for white and black truffles. Equally popular is the high quality Umbrian olive oil, that with its pleasant bitter and slightly spicy aftertaste is considered as one of the best extra virgin olive oils of Italy. As dessert, you'll find the Ganascioni delle Suore di Santa Lucia, which were offered in the past with a cup of Barcarola (barley coffee and anisette). 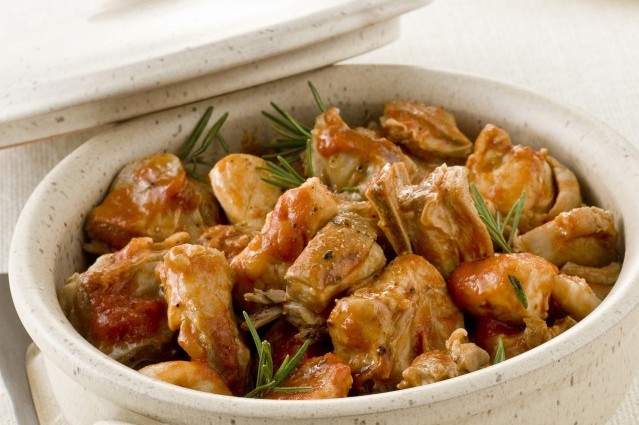 No doubt the most famous events in the city of Gubbio are the Corsa dei Ceri (Candles Running) and the reenactment of the Palio della Balestra (Crossbow Palio). The Corsa dei Ceri has very ancient origins and is held every 15th of May, whereas the Palio della Balestra takes place since the XV century on the last Sunday of May. In autumn, the National fair of white truffle and agri-food products is a really attractive event, which includes tastings, exhibitions, concerts and many shows. Finally, one of the most exciting events is the lighting of the Christmas Tree of Gubbio, the largest Christmas tree in the world that shines every year during the Christmas holidays. 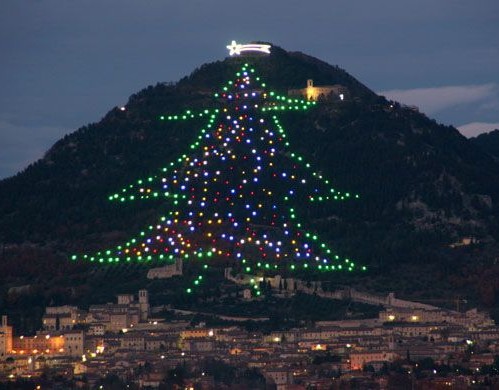 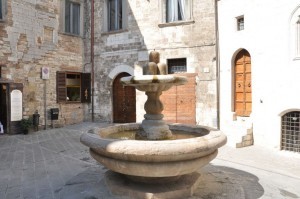 Have you ever heard of the famous madmen license (patente dei matti)? In the historic center of Gubbio there is a fountain called Fontana del Bargello, better known as Madmen Fountain (Fontana dei Matti). Right in this place, you can win the special license. All you need to do is walking around the fountain for three times and at the end of each turn you have to be sprayed with water from the fountain by a local person. After the ceremony, you'll be a honorary (and certified) mad of the city! This strange custom is rooted in the history of Gubbio, which is called par excellence 'the city of madmen', because of the unpredictable and free character of the citizens. If you want, a copy of the license is issued and sold by any store in Gubbio, but you can always ask for the original copy paying a contribution to the association Maggio Eugubino. Many tourists take part in this unusual custom in memory of their visit in this beautiful town. 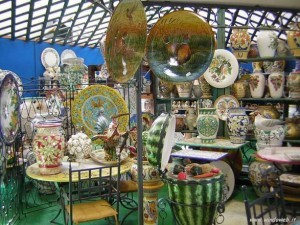 The historic center of Gubbio hosts lots of workshops that continue with passion and pride the art and crafts traditions of the past.

Here artisans sell and create their customized products following the different demands of the market.

The most popular crafts are pottery, wrought iron and wood manifacturing. The antiques sector is also present and constantly growing.
Other widespread activities include leather and gypsum processing, as well as lutherie. 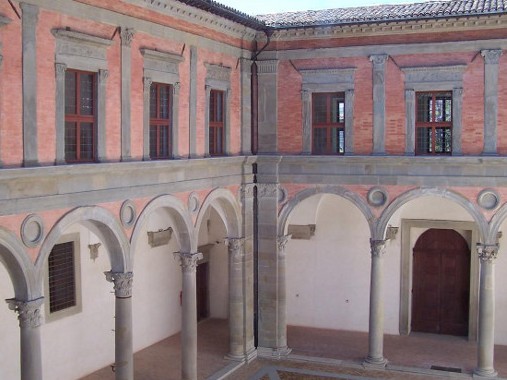 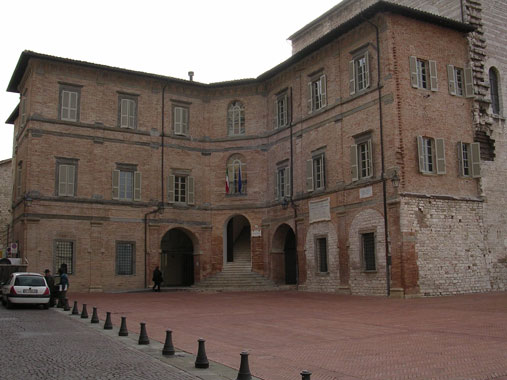 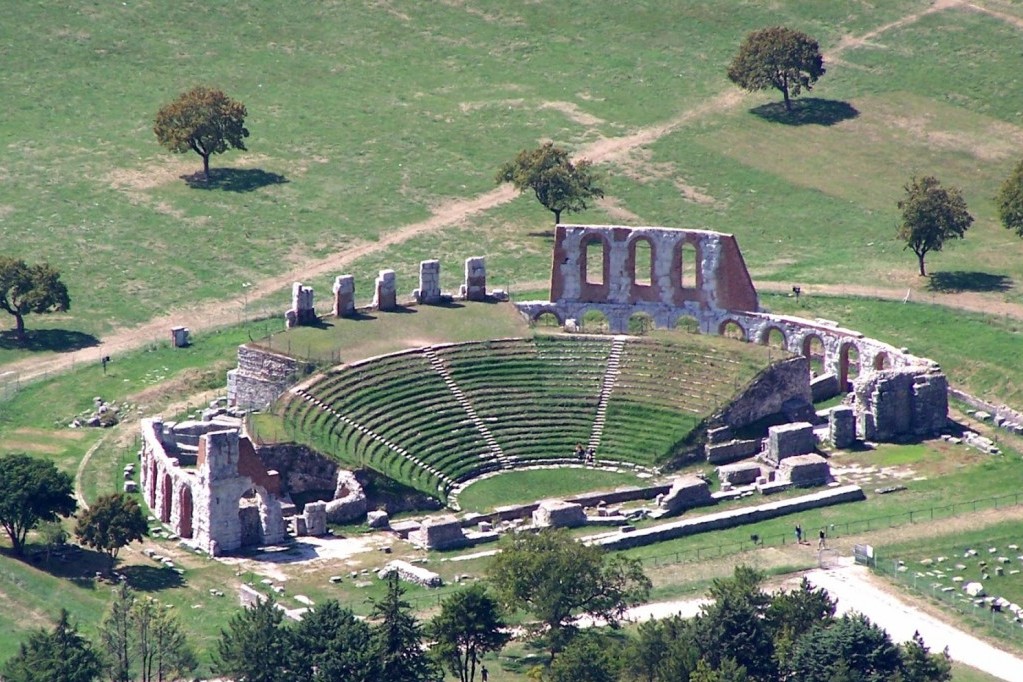 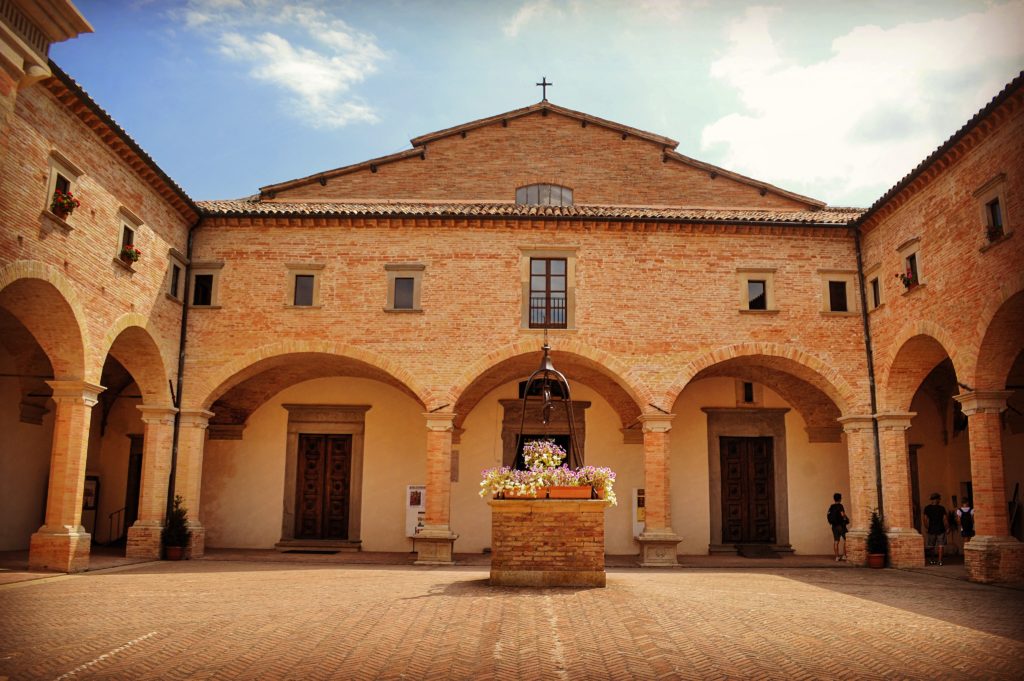 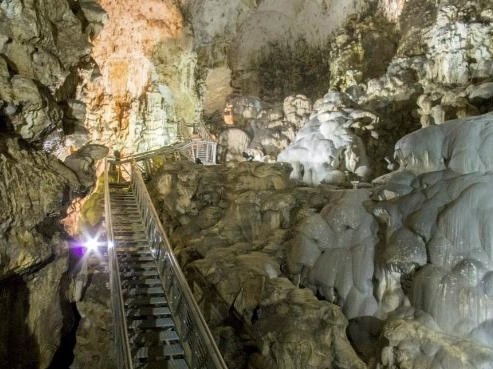 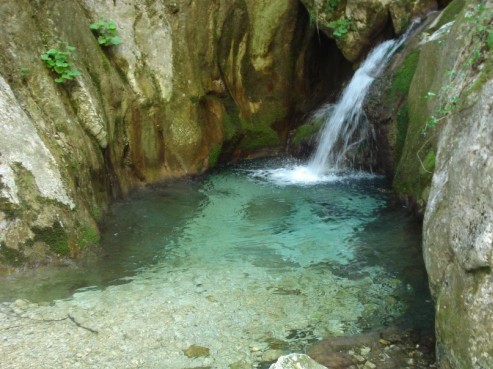 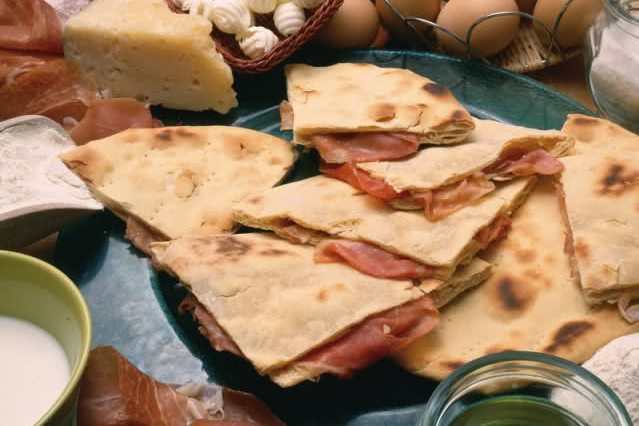 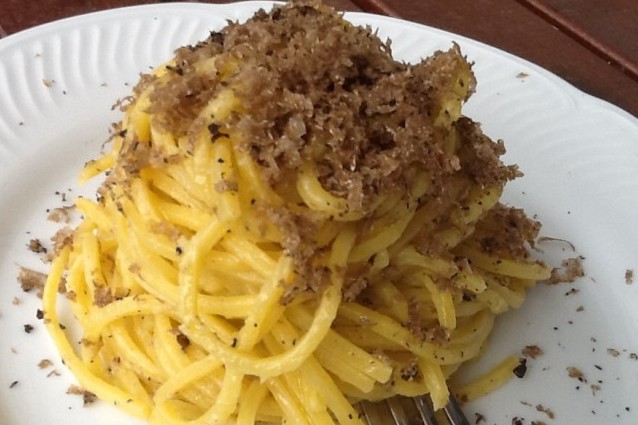 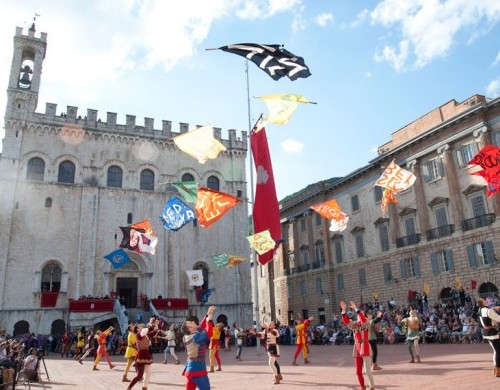 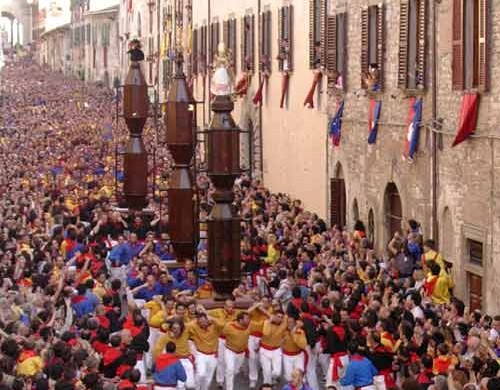