Visit Le Marche in a week: the northern area

For a breakfast overlooking the sea, a picnic among the hills or a pleasant dinner in a typical inn of a medieval village, just choose to visit Le Marche in a week, the northern area of Le Marche as your holiday destination!
Despite being a little extended territory, the northern area of Le Marche offers its visitors endless scenarios, from sunsets over the sea to dawns among the Apennines. This region is also the backdrop to great literary works by some of the most famous writers in Italy such as Dante and Leopardi.

A 7-Day tour of Le Marche

Although the most visited areas in Le Marche are very close to each other – about one hour driving maximum, they all deserve a planned visit or even an overnight stay to enjoy the best of these small towns between the Adriatic coast and the Apennines.

Discovering the north of Le Marche: the departure

You could start your tour of Le Marche from Pesaro, one of the most lively cities on the Adriatic coast. The city of Pesaro is known for being the home town of the famous composer Rossini and is a nice surprise located just below the Romagna Riviera. Cycling or walking along the long avenues by the sea or through the old town, you can move in just a few minutes from Piazza del Popolo, the city heart, to the fine sandy beaches.

During your walk, you'll be enchanted by the eighteenth-century buildings and the historical centre full of relevant archaeological finds, from the imposing Rocca Costanza, which has watched over Pesaro since 1400, the theatre dedicated to Gioachino Rossini and the Cathedral with its wonderful mosaics.

To become familiar with the city streets, you can start exploring inside and outside the ancient walls and then stop along Viale Trieste for a walk by the sea, especially on a summer evening when the many beach clubs are open. Right where this street ends and the seafront begins you will see one of the symbols of the city: the Great Sphere by the famous sculptor Arnaldo Pomodoro, a meeting point that is very well known by young local people. In this square you will find one of the most important examples of Liberty architecture in Italy, Villino Ruggeri.

Pesaro has a lot to offer to history lovers, but it has also a green heart which is the Mount of San Bartolo and the surrounding natural park of the same name. The slopes of the mountain stand out over the sea. Here you can enjoy a unique panorama from the hinterland to the north coast, towards the Emilia Romagna. Besides being a great naturalistic treasure, this park is home to many beautiful historic villas.

After a long day spent among art, culture and fun facts you can take a refreshing dip in the Adriatic Sea. The coast of Pesaro is perfect for families, actually its waters are shallow and child-friendly. Did you know that in Pesaro, the sun rises and sets over the sea? To end your busy day, have a drink watching one of the most amazing sunsets on the coast and taste some of the local typical appetizers.

Start&Stop: the tour stops a few steps from the start

Shortly after leaving Pesaro, it's time to stop again! Continuing your tour to discover the north of Le Marche you should stop in Fano, known as the city of fortune, because of the Temple Fortuna around which the entire city has developed.

The historic walls of Fano stretch for over half a kilometre, interspersed with cylindrical towers offering a wonderful example of Roman architecture that dates back to the period of the Emperor Augustus. Once in Fano, you can start your walk from the area of Pincio just outside the city walls, then stop to admire the gateway to the city. The arch of Augustus welcomes people who enter the town centre and makes it even more fascinating. From the arch you can reach the town centre by taking the ancient Via Flaminia which is the main street within the walls. It is one of the symbols of the city of Fano. You cannot miss a trip into the mysterious underground Fano. A fascinating itinerary through tunnels and galleries, taking the visitor to truly unique places.

Once you have visited the historical centre there is still a lot to do and see in the seaside area. The city has a long seafaring tradition which can be found in the characteristic fishermen's houses, along its beaches and in the many excellent restaurants. For an unforgettable relaxing moment I suggest the Walk of Lisippo on a fixed dock protected by the rocks, overlooking the sea. 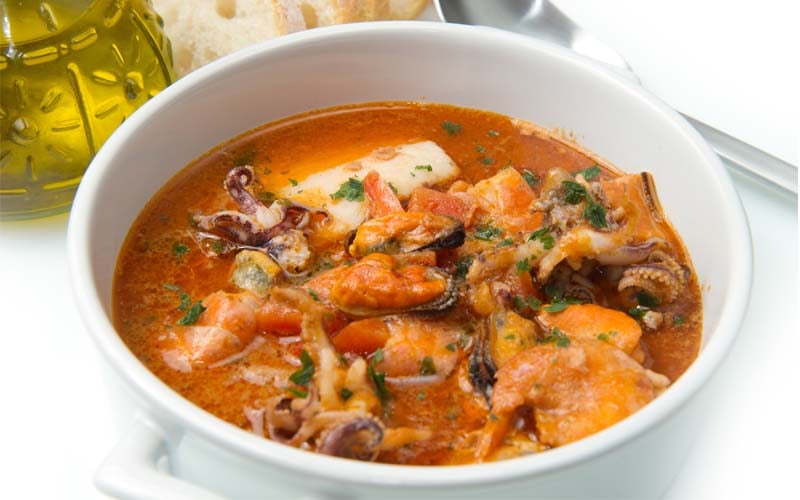 After all these beautiful walks to discover Fano that will never cease to amaze you, it's finally time to sit at the table and try the two local specialities: Brodetto and Moretta.

The Brodetto of Fano (fish soup) is a typical dish of the Adriatic Sea cooking tradition, while Moretta is a hot drink mixed with a liquor born among sailors and fishermen in the port of Fano to get warm before going out to sea.

A castle dominating the north of Le Marche

A trip to Le Marche should include a visit to one of the most beautiful and famous castles in Italy. Then, you need to schedule a day exploring the historical beauties of Gradara.

You'll see this lovely town even before getting there, as the beautiful medieval castle stands out among the woods and hills. Just a few steps and you will be immersed in an atmosphere of old times that recalls a thirteenth century tranquillity. 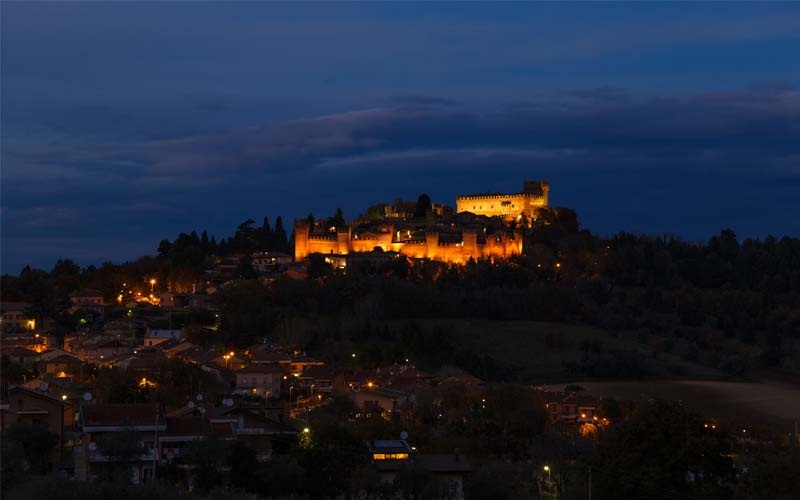 The Castle of Gradara was the first military fortress on a border land which was turned into a majestic noble residence by powerful families. It is a charming place evoking memories of wars but also troubled love affairs. After crossing the drawbridge you enter the courtyard and find yourself in front of the Mastio, the biggest tower. The fortress should be discovered step by step, reliving the many stories trapped inside. And if it is a jewel by the daylight, it becomes a true wonder when the lights go out.

Tradition in this medieval village certainly contributed to making this fortress famous as the background of the unfortunate love between Paolo and Francesca, sung by Dante. But what really makes the castle of Gradara unforgettable is the architectural beauty of an extraordinarily well-preserved complex, that has retained the appearance and atmosphere of an ancient medieval settlement.

After visiting Gradara and enjoying its beauties, sit down and taste one of the many typical local dishes. The local cuisine offers delicious recipes that use local products accompanied by excellent wines from Le Marche. These dishes are based on genuine meat and vegetables and are served with Sangiovese DOC wine, but also with high quality extra virgin olive oil. A traditional dish in Gradara is Tagliolini con la Bomba, a peasant dish with a curious name deriving from its preparation method. Ingredients are simple but the result is really tasting. While you're waiting for tagliolini to be served, don't take your eyes off the view and lose yourself in the blue sky and the sea.

An uphill arrival to the Ideal City, the birthplace of Le Marche Renaissance

A journey to discover the north of Le Marche cannot end without a trip to the city of Urbino, seat of an ancient university and perfect destination for art history lovers. Urbino is a city with a thousand-year history where echoes of the Renaissance combine to the future of new generations. Its university is home to renowned artists, scientists, mathematicians and literary men. Birthplace of the great painter Raffaello and site of the Unesco world heritage, this city appears among the gentle hills of Montefeltro. You can get there by car or by bus from Pesaro in less than an hour. The journey is among winding roads that rise and descend among the green countryside of Le Marche. 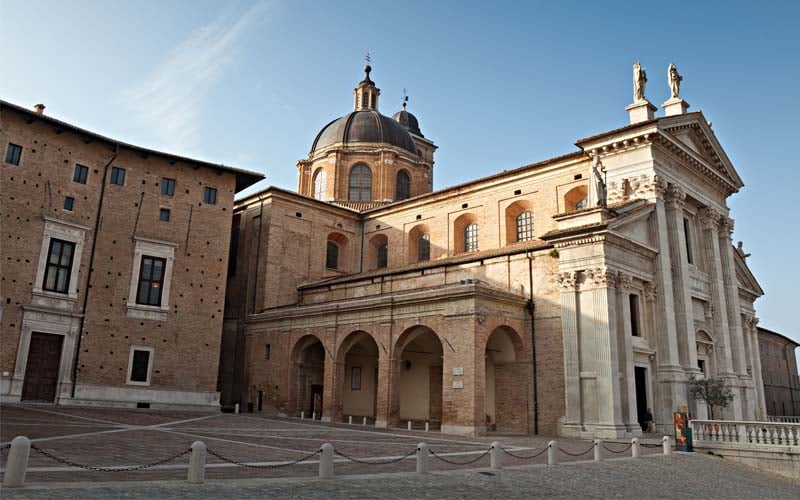 Urbino is a magic place, an evidence of the passing of time between the Middle Ages and the Renaissance. By going up the city walls you can admire the immensity of these rich lands that still inspire artists, poets and singers. The imposing Palazzo Ducale, one of the most interesting architectural and artistic examples of the Italian Renaissance, is a wonderful and mysterious place. Among the many rooms of the building there's a private one where the Duke Federico used to spend his time: the study room. It preserves valuable stuccos on the vaulted ceiling and a lower section paneled with engraved wood. Nearby the Palazzo Ducale there's the imposing Cathedral, which is also rich in history and amazing architectural techniques.

After visiting these two landmarks in the city you will surely be hungry! So, it's time to have a break in one of the characteristic food shops of the centre. Crescia is a kind of piadina (flat bread) stuffed with Salame di Montefeltro (salami) or Prosciutto di Carpegna (ham), pecorino di fossa (cheese) and above all with Casciotta (a pecorino cheese). You'll get the energy to continue your visit in Urbino. From the central square, one of the main uphill streets in Urbino leads to Raffaello's house, a must-see attraction if you want to know more about the origins of one of the greatest painters in the history of art. Once you leave Raffaello's House, continuing along the same road you'll get to the monument dedicated to Raffaello Sanzio, right on top of the steepest climb of Urbino. But that's not all, a breathtaking panorama and some deserved moments of relaxation await you! Actually from the statue of Raffaello, you can quickly get to the Albornoz Fortress. This is the most panoramic point of the city, where students spend hours studying in the open air, inspired by the view over the cathedral's dome, the turrets of Palazzo Ducale and all the shapes of this Renaissance city nestled among the hills.

The journey to discover the northern part of Le Marche does not end here...

In addition to a rich and priceless cultural heritage, Le Marche offers a unique cooking tradition, counting on the flavours of fish from the Adriatic and of the products from the hills and mountains. Over 20 wines and many varieties of extra virgin oil with different aromas are served with the recipes of the local cuisine. 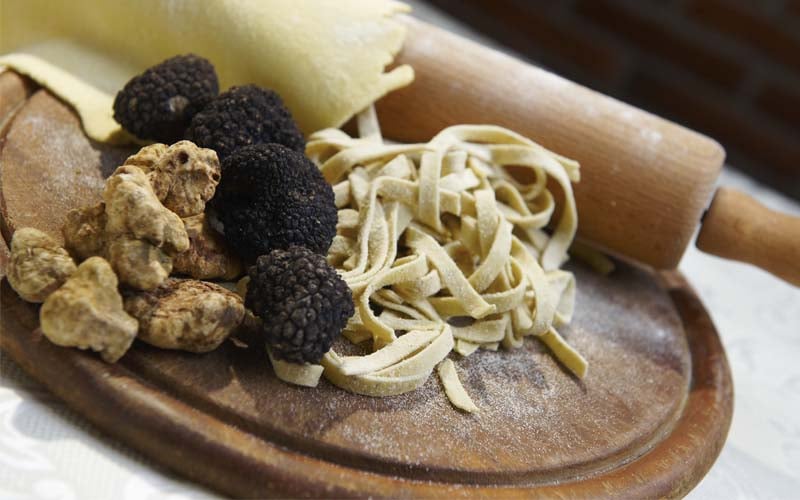 Cold cuts are the typical appetiser that can be found in every corner of the region. Thre's a wide variety of local meats such as Fabriano salami, cacciatore salami, ciauscolo, loin, Carpegna ham, coppa marchigiana as well as cheese like fossa cheese, pecorino in botte and casciotta d'Urbino. In the interland, it is possible to find both white and black truffles. The areas where you can find truffles are mainly in the province of Pesaro-Urbino. White truffle can be found especially in the area of Sant'Angelo in Vado, Acqualagna, Pergola and Apecchio.

However there are also other typical dishes in Le Marche region, such as the famous cappelletti, the fish soup, which is prepared differently in each coastal town of Le Marche region, the renowned crescia originating from Urbino and widespread throughout the region, which led to the modern Romagna piadina.

Our cultural food & wine tour has come to an end and it's time to relive the places we have just visited from another point of view, maybe sipping a glass of Le Marche wine served with those products bought during your stay in Le Marche and looking at the pictures taken in the most characteristic places of central Italy.