Pesaro: the City of Rossini

Pesaro is a seaside city in the province of Pesaro and Urbino, in Le Marche region. It overlooks the sea and is situated between two coastal hills: the San Bartolo and the Ardizio. The city offers all opportunities of a well-developed historic center characterized by buildings, museums, churches, elegant streets, squares and fortresses. It's a destination that people choose especially in the summer, thanks to the many events promoted and the presence of bathing facilities that enliven the coast.

What to see in Pesaro

The old town of Pesaro develops around Piazza del Popolo, which is the true city centre. Here you'll find the Ducal Palace, an impressive building in the Renaissance style, today the seat of the Prefecture. At the center of the square you can admire the beautiful Fountain of Piazza del Popolo, with octagonal shape and adorned with sea horses and tritons.

It is a typical military forstress built to defend the city from enemies'attacks. Over the years, it has undergone several restorations and today it is the venue for exhibitions and cultural conferences, most of them related to the Rossini opera Festival.

This palace was the residence of the Mosca, a family of wealthy merchants. Later on it became a social and cultural meeting place in the city. Today it houses the Civic Museums, including the Art gallery and the Museum of Ceramics. Here you can also admire the altarpiece of the Coronation of the Virgin by Giovanni Bellini.

This theater is named after Gioacchino Rossini, a world famous composer. The theater is in Neoclassical style and consists of four tiers of boxes. Throughout the year it offers many plays, operas and concerts, such as the famous Rossini Opera Festival. 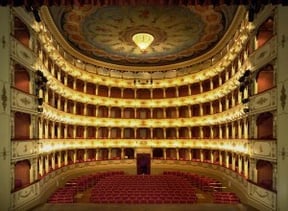 The Cathedral of Pesaro and churches

The Cathedral of Pesaro is the main church of the city.
It is located in the street Via Rossini and is dedicated to Maria Santissima Assunta and St. Terenzio, the protector of the city. It's a Romanesque Gothic structure characterized by a central rose window and a white portal. Inside it has a Neoclassical style.

The childhood home of Gioacchino Rossini

One of the most famous attraction is the childhood home of Gioacchino Rossini, the renowned Italian composer.

The house is on three floors and is located in the city center, in the street Via Rossini. It still preserves several objects retracing the life of the composer.

There is an entry ticket of 10 Euros which also gives access to the Civic Museums of Palazzo Mosca and the archaeological area in the street Via dell’Abbondanza. 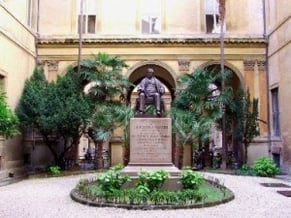 The Roman Domus in Via dell’Abbondanza

To enrich the cultural offer of Pesaro an archaeological area has been open over recent years in the street Via dell’Abbondanza. This area was discovered in 2014 and allows you to visit the remains of an ancient luxurious house of the Roman imperial era. The 30-minute visit includes 3 D movies reproducing the setting of the Roman Domus.

Another symbol of Pesaro is the so called Palla di Pomodoro or Sfera Grande, a sculpture located in the square Piazza della Libertà. It's a work by the sculptor Arnaldo Pomodoro, today a meeting place for local people.

This statue is located in the square Piazza Matteotti and portrays Odoardo Ginsanti, better known as Pasqualòn, with a little dog. Pet it, it'll bring you good luck! This man was a poet writing in the local dialect of Pesaro and composed many poems telling about daily life.

Villino Ruggeri is located on the seafront of Pesaro and is one of the most important buildings in Liberty style all over Italy. This villa was built by Giuseppe Brega on the request of its owner, Mr Oreste Ruggeri, one of the richest men of Pesaro. The house is richly decorated and surrounded by a large garden with a circular fountain decorated with lobsters.

Villa Mirafiore is totally immersed among the hills of Pesaro, but not too far from the city center. The villa was built for Guidobaldo II della Rovere and still represents an important cultural and art center. Its rooms are home to many works of art, including the Madonna con il Bambino and the Maddalena by Guido Reni.

Villa Imperiale is an ancient noble house situated on the San Bartolo hill. It is open every Wednesday, June to September.

The Cycling Route of Pesaro

In Pesaro most people move by bicycle, making it the perfect means of transport. The city government has built an overground cycling network, the so called Bicipolitana, for all people travelling on two wheels. There are more than ten lines that cover the center, the neighbouring areas up to the city of Fano. I suggest you the line running along the Adriatic coast, the view is truly beautiful.

Sea, sea and yet, sea!! That's what comes in my mind when thinking of Pesaro. Seven kilometers of free and private equipped beaches, that will suite all tastes. Recently its beaches have been awarded with the Blue Flag prize for their quality. The area is ideal for families searching for relaxation without giving up on entertainment and local cultural life. Around the waterfront you will find bars and restaurants to taste the local specialties. Pesaro is also surrounded by the park of the San Bartolo Mount, which is well connected to the center by public transport and easily accessible by car or by bike. I advise you to visit its panoramic points and unique bays.

Events and Shopping in Pesaro

You won't get bored in Pesaro! There are lots of events for all tastes. The most famous event is the Rossini Opera Festival, which is held every year in August and attracts many opera followers from around the world. At the end of June, there is also the International Festival of the New Cinema (Mostra Internazionale del Nuovo Cinema), gathering films from unknown countries and authors. For children, in mid-June there is the White Midnight (la Mezzanotte Bianca) with games, shows and fun. Pesaro is also home to the Adriatic Arena and an exhibition center for concerts, conferences and conventions. Of great interest for visitors the local street markets and fairs, such as the fair of St. Nicola in September, the Port festival on the first Sunday of July and the Antiques market held every third Sunday of the month. Real shopaholic cannot miss the so called Stradomenica, an event held every third Sunday of each month. Shops of the city center and the ones all along the seafront remain open till late. The center of Pesaro is home to many shops and very luxury boutiques. 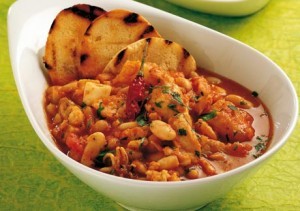 Local cooking in Pesaro is a perfect mix of sea and mountain products.

On one side, it takes the hinterland influence with typically traditional dishes such as roast pork, Vincisgrassi, cold cuts and cheeses.

On the other hand, due to its seaside location, it is rich in seafood specialties, first and foremost the Brodetto, a fish soup served with bread.

Some typical dishes are Pasticciata alla Pesarese, meat and lard casserole with carrots, celery and cloves, and the veal Olivette - rolls covered with ham cooked au gratin with basil. Regarding wines, the Colli Pesaresi are the local variant.