Urbino: the city of the Italian Renaissance

Urbino is probably the most famous city of Le Marche and owes its reputation to two great figures, the Duke Federico da Montefeltro  who supported its maximal expansionduring the Renaissance and the painter Raffaello Sanzio, who was born there. Along with the artistic beauty of its palaces, churches and monuments, you will be impressed by the evocative hill landscape surrounding it. Since 1998, its historic centre has been included among the UNESCO World Heritage, but I have to give you an important warning before leaving: all streets of the city centre are steep and narrow, so get ready for a little healthy exercise!

The Ducal Palace in Urbino is one of the most interesting architectural and artistic examples of the Italian Renaissance. Construction began in 1444 by the will of Federico da Montefeltro, a proud military commander and art lover. Surely you've seen his famous portrait painted by Piero della Francesca, now kept at the Uffizi Gallery in Florence. The main highlights of the building are the facade of the Torricini, the courtyard of honour and the Studiolo, the private study of the Duke, made by Flemish artists and with walls covered with impressive wood inlays. Nearby, don't miss the so called 'la Data' or ducal stables, connected to the building by the magnificent Helicoidal Flight. Restored in the 1970s, today this flight is an alternative way to access the historic centre from Piazzale del Mercatale, the main gateway to the city where you'll find an ample underground parking. Here you can also get an elevator to reach the centre without any effort! ;) 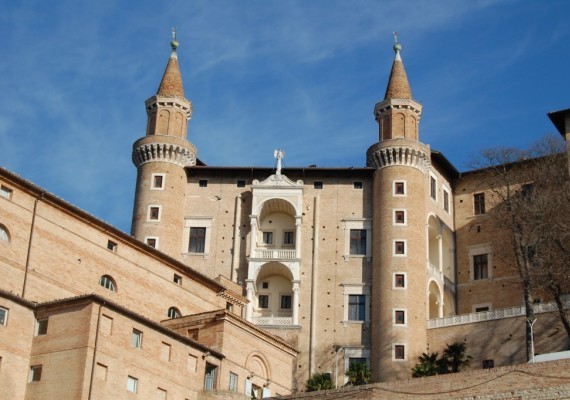 The National Gallery of Le Marche

The Ducal Palace is now the seat of the National Gallery of Le Marche, with a collection of works by Raffaello, Tiziano, Piero della Francesca and Paolo Uccello. Here is kept a symbolic painting of the Italian art: the ideal City (la Città ideale). There are about 80 rooms used as museum, with works from the 1300 to the 1600, mostly paintings but also furniture, sculptures, tapestries and drawings. The main works are located on the first floor, divided between the apartments where the Duke and his family lived. The tickets cost is about 12 euro, but reductions are present.

The house of Raffaello

Located in the street of the same name Via Raffaello, the house of Raffaello is where he was born in 1483 and where he spent the first years of his artistic training at the school of his father, Giovanni Santi, a renowned painter himself. After several events, the house was acquired in 1873 by the Academy Raffaello and over time was enriched with many works of art: paintings, sculptures, ceramics, wooden furniture, etc. Downstairs there's his father's workshop, now used for temporary exhibitions; on the first floor there are copies of Raffaello's paintings and gifts from other artists; in his bedroom there is a fresco depicting the "Madonna and Child" considered as an early work. On the first floor there is also a small courtyard with the well and the basin used to grind colours for paintings. Leaving the Santi's house, continue along the steep Via Raffaello till Piazzale Roma, where you will find a statue dedicated to this great character. 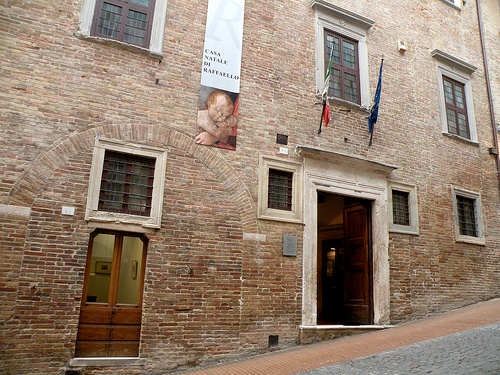 The Cathedral of Urbino 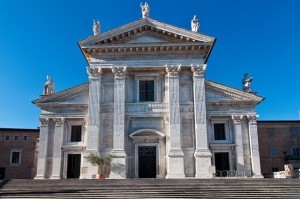 The Cathedral of Urbino is the most important church in the city.
Its neoclassical facade with the seven statues of guardian saints is really very scenic! The current architecture is the result of several restorations, the last of which occurred in 1800 following an earthquake. Inside there are two beautiful paintings by Federico Barocci: the Martyrdom of Saint Sebastian and the Last Supper. The most interesting area of the cathedral are the caves (Grotte), that have hosted for centuries  a Brotherhood. During World War II, these caves hosted also the works of the Treasure of St. Mark's Cathedral in Venice, to protect them from bomb attacks and the Germans. 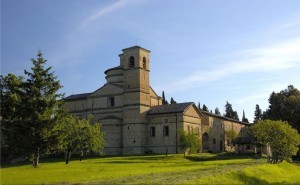 There are so many churches and oratories which are worth a visit. I recommend the Oratory of St. Giovanni and always in the same street the Oratory of St. Giuseppe, famous for the sixteenth-century marble crib by Federico Brandani; the Church and Convent of St. Francesco, one of the oldest in Urbino which houses the remains of Raffaello Sanzio's parents; the former Monastery of St. Chiara; the Church of San Domenico and the Church of St. Sergio, which was the first city cathedral. In the countryside at about two kilometers from the historic centre, there is the Church of San Bernardino, also known as the Mausoleum of the Dukes. It is part of a monastery annexed to the city cemetery and was built by the will of Duke Federico da Montefeltro, to house his own tomb and those ones of his successors.

It is the meeting place for Urbino's citizens and the numerous university students. The two main buildings facing the square are Palazzo degli Scolopi and Palazzo del legato Albani. 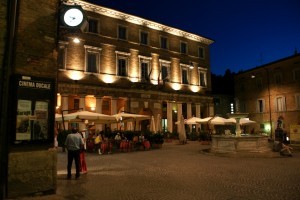 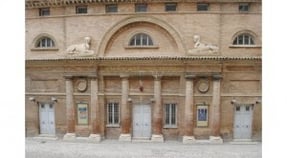 At the foot of the Ducal Palace you'll find the Raffaello Theatre.
With the construction works that lasted from 1845 until 1853, some of the top structures of the helicoidal flight were torn down.
Then, between 1977 and 1982, the building underwent a radical restoration, especially on the inside. The facade is characterized in the central part by six doric columns and two stone sphinxes. The hall is horseshoe-shaped, with three tiers of boxes and a balconied top gallery, with a total capacity of 460 seats.

The park of Resistenza and the Albornoz Fortress

It is one of the favourite places for students both to study and relax and for citizens to go for a walk with panoramic view.
After a visit to the fortress, built to defend the city and which now houses a museum of weapons, you could finally relax on the lawn enjoying a unique view of Urbino and the Ducal Palace. It'll take your breath away!

Urbino is the seat of one of the oldest universities, the Carlo Bo born in 1506.

It boasts a famous Academy of Fine Arts and it's also known as the "Book Capital" thanks to the presence of the Institute for Book Decoration and Illustration.

Walking through the streets of the centre, you'll surely notice the bustle of students, moving from one seat of the historic centre to another! 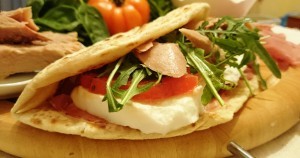 You can not leave Urbino without tasting at least two of the must-eat products: the Crescia Urbinate, a kind of piadina to enjoy with the local cold cuts such as the Salame di Montefeltro, the Prosciutto di Carpegna and especially with the other typical specialty, the Casciotta, a PDO pecorino cheese of ancient origin also appreciated by Michelangelo. As for drinking, even an old legend says that Hannibal drank the best wine in this city, it was a aged Piceno. Today there are many quality wines with registered designation of origin served in restaurants and bars: Rosso Piceno and Cornero, the white wine from the Colli Maceratesi, the Lacrima di Morro, the Verdicchio dei Castelli di Jesi and Metelica and the Bianchello del Metauro. After all, with this walking up and down, you definitely deserve a reward! 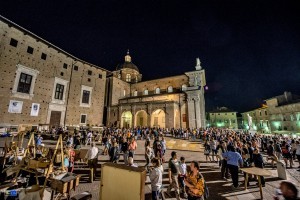 And finally, here are some of the most anticipated events in Urbino, take note! :)
The Duke Festival in its two versions, one in the summer on the third Sunday of August and the Winter edition during the Immaculate Conception; it is a historical re-enactment of ancient trades, with parades, markets, shows and the military game of Aita. On the first Saturday and Sunday of September there is the so called Festa dell'Aquilone (Kite festival), a competition of kites in the nearby hills of the Cesane. At the beginning of October it's time for Biosalus, the National Festival of Organic products and Holistic Wellness. During the weekends leading up to Christmas there are so many shows and exhibitions, including the event "Le Vie dei Presepi" (Streets of Nativity Scenes), an exhibition of cribs in dozens of churches and buildings scattered through the streets and alleys of the city. 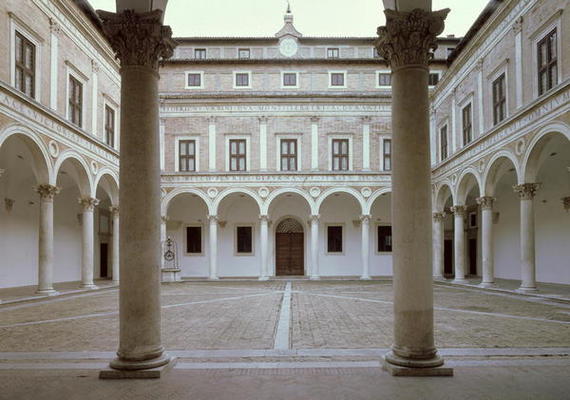 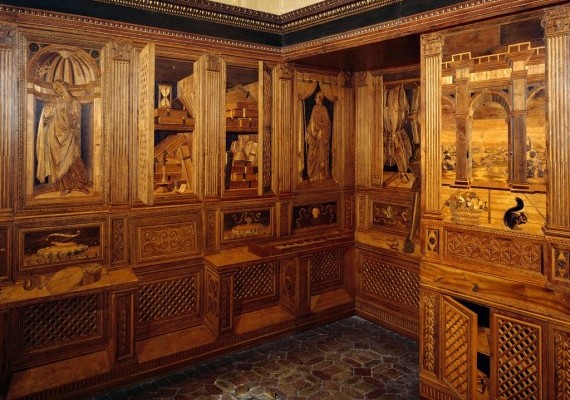 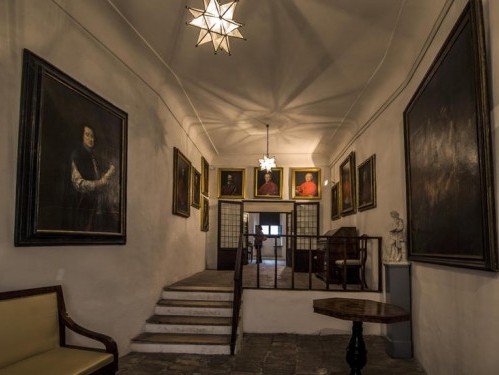